The Science Behind Brain Training

We are proud that our all our products and services are backed by data and science. Here is the collection of our white papers and journal articles.

The objectives are to evaluate the implementation of community-based computerized cognitive training (CCT) and its effectiveness on cognition, gait, and balance in healthy older adults. 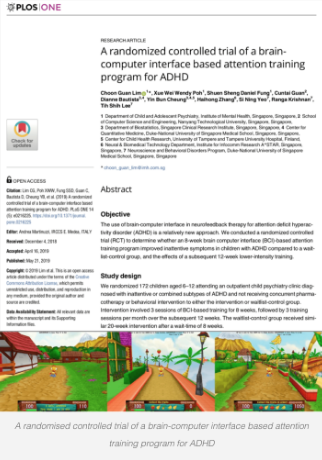 A randomised controlled trial (RCT) was conducted for 172 children aged 6 to 12 attending an outpatient child psychiatry clinic diagnosed with ADHD and not receiving concurrent pharmacotherapy or behavioural intervention. The intervention involved 3 weekly sessions of BCI-based training for 8 weeks, followed by 3 training sessions per month over the subsequent 12 weeks.

Results suggests that this intervention is an option for treating milder cases or as an adjunctive treatment. 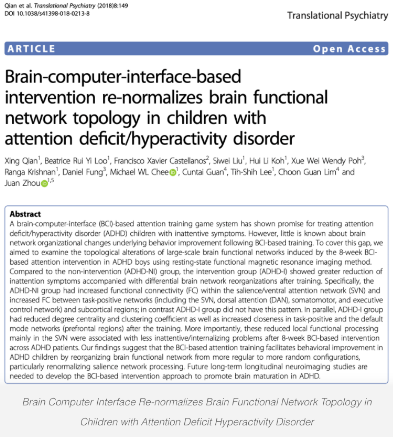 This neuroimaging study is part of a larger randomised controlled study consisting of 172 children with ADHD. This study consisted of 66 boys with ADHD with symptoms of inattentive and combined subtype that went through the BCI based game intervention for 24 sessions over 8 weeks and they were split between intervention and non-intervention groups.

Different brain networking activity was observed in both groups. Children in the intervention group showed reorganised brain network activity – increased closeness in the prefrontal region of the brain that is associated with attention (i.e. less inattentive symptoms).

The focused brain area is activated after BCI intervention as compared to very widespread activation of multiple brain areas in children from the non-intervention group.

In this study, the BCI-based attention brain training game system was investigated on 20 unmedicated ADHD children aged between 6 to 12 years old with inattentive and combined subtype symptoms. The treatment consisted of 24 sessions of training over 8 weeks followed by 3 once- monthly booster training sessions with only an intervention group.

We are in a world of rapid information growth and unprecedented longer lives. Both factors place a great challenge for us to maintain cognitive fitness through life. To enhance our cognitive well-being and prevent cognitive decline, it’s important that we engage in mental exercises to achieve a healthy lifestyle.

Read the whitepaper to know more about improving cognitive well-being through gamification and EEG.

Clinical trials have proven that the use of neurofeedback with Brain-Computer-Interface (BCI) based games are effective at reducing the symptoms of ADHD, complementing current therapies by being non-invasive, conveniently digital and as such can be practiced with ease while avoiding the downsides being too much of a burden on time and monetary resources.

Read the whitepaper to know more about complementing conventional approaches for treating ADHD.

Everyone knows that our mind slows down when we age, there is no secret behind that. However, at what point does your mind start to retire? Many people disregard the fact that mental decline is a lifelong process, and starts at an early age. Take a look at what the experts have to say, and you will understand our passion in helping you to solve this problem.

In this section, you will find research on how mental stimulation helps to improve your attention, memory, multi-tasking skills.

Research has shown that mental stimulation leads to an increase in memory over time. Keeping your mind stimulated also creates positive effects in your day to day life.

The relationship between n-back performance and matrix reasoning—implications for training and transfer Published in: Intelligience Lead Author: Susanne M. Jaeggi

Short- and long-term benefits of cognitive training Published in: Proceedings of the National Academy of Sciences of the USA Lead Author: Susanne M. Jaeggi

There are studies that show evidence of the changes in the brain. The research highlights how the brain reacts to mental stimulation.

These studies show that the best results for brain training shows on children, and those approaching their later years in life.

Results has shown that it may help you improve your attention, memory, spatial skills, etc. This section shows research which backs up the claims that mental stimulation can help improve those specific areas.

The Lancet: Healthy eating, exercise, and brain trainingPublished in: The Lancet

Research does suggest that the right type of games can stimulate minds and make it perform at a much higher level.

Games for seniors are not just for fun Published in: The Straits Times Lead Author: Samantha Boh

We are often asked, “Are there any scientific proof that the EEG headband paired with the Neuroscience-designed games work?” Here we have compiled our research presenting some significant validation work that shows proof that cognitive performance can be enhanced through EEG-neurofeedback, and recently, EEG-based technology has become more popular in “serious” games designs and developments.